November 28th kicked off the beginning of Hannukkah, an eight-day Jewish holiday known as the “Festival of Lights.” It is celebrated in late Nov. or early Dec. The lighting of nine candles in a special holder called a Menorah commemorates this glow-filled holiday.

In solidarity with this bright time of year, we’re highlighting some of the marine animals that light up the seas. They glow for different reasons and in different ways. Together, however, they create their own submerged festival of lights. 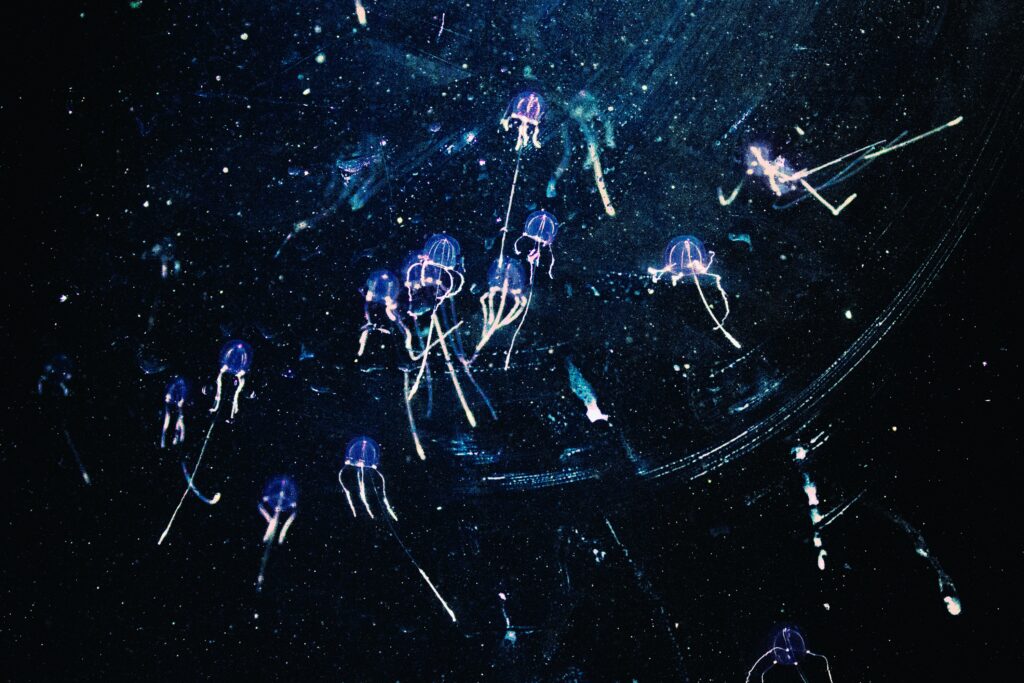 Box jellyfish glow against the dark waters. Some jellies are bioluminescent, while others fluoresce. Billy Huynh / Unsplash

Bioluminescence: a Glow from Within

Organisms create this glow through a light-producing chemical reaction inside them. Think of it like a glow stick: when you “crack” the tube, the chemicals inside mix to produce light.

In bioluminescent animals, the compound luciferin releases light when it reacts with oxygen. Some animals, like tiny dinoflagellate plankton, produce their own luciferin. For example, if you’ve ever seen bioluminescence while scuba diving or kayaking at night or watched glowing waves crashing on a beach, it’s these microscopic organisms at work. They look like glowing twinkles in the water and sand when agitated.

Explore Bioluminescent Bay in the Caymans 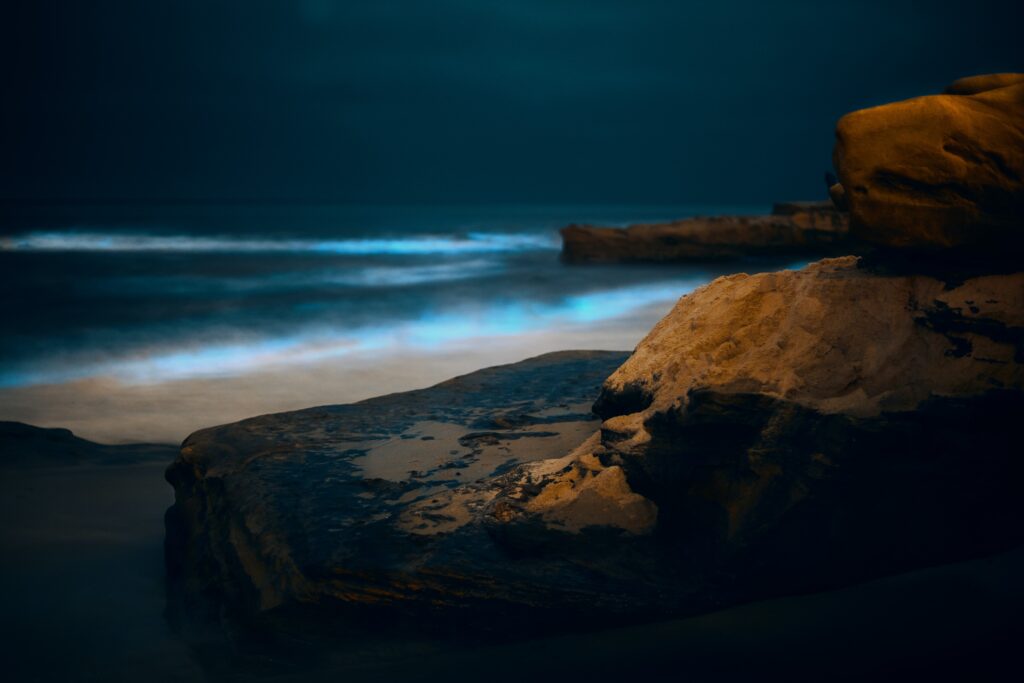 Other animals, like squid and some fish, absorb bioluminescent bacteria that contain luciferin, which they then use to glow. For instance, within hours of birth, Hawaiian bobtail squids attract these glowing bacteria towards a special light organ above its eyes. They live out their days independently but in a symbiotic and beneficial relationship. The bacterial lights help the squid avoid predation, and the bacteria gain a safe home and food. 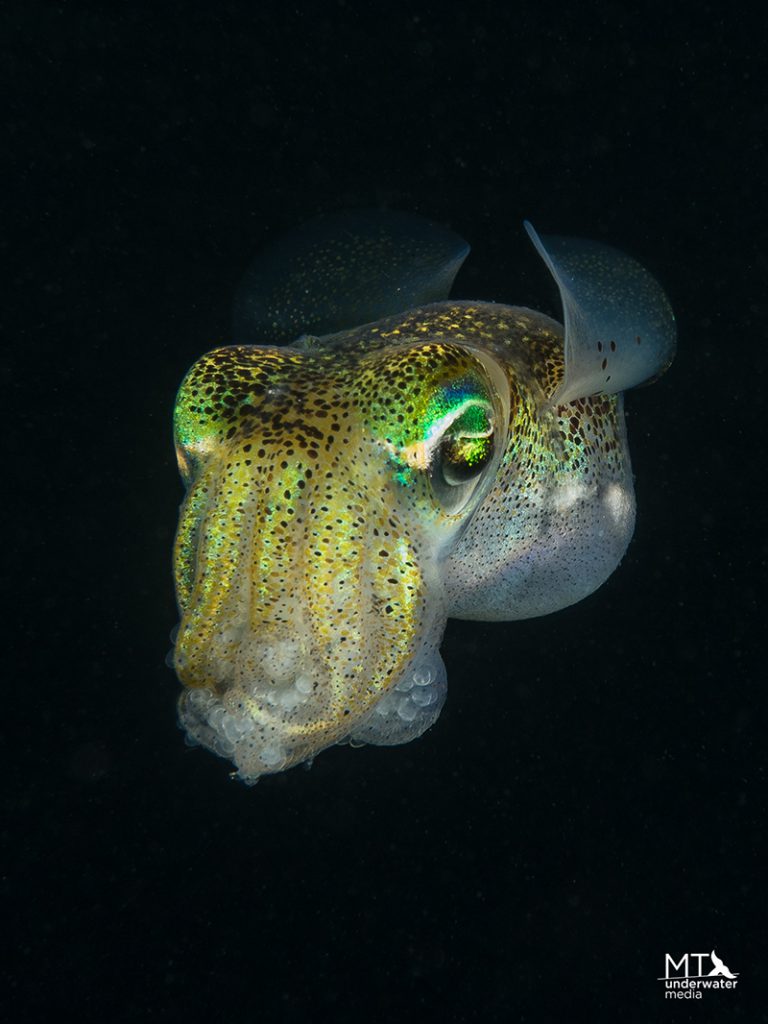 Bioluminescent bacteria flock to light spots above the eyes of Hawaiian bobtail squids within hours of birth.

Bioluminescence creates light that can be seen even in pitch-black. It can do so because it is a chemical reaction occurring within an organism. This proves useful especially in the deep oceans where there is no light.

Down there, giant Humboldt squids use bioluminescent glow patterns and countershading to communicate with each other. Male sea-fireflies also use their glow to attract potential mates. They squirt bright dots of light and then “zip upwards” before doing it again. This creates a glowing map straight to them.

In the deep, angler fish and related species also use bioluminescence to catch their prey. Their light is concentrated in lure-like appendages usually dangling in front of their mouths. Small fish and animals see the glowing lure and come for a meal. Instead, they find sharp teeth.

Finally, some animals use bioluminescence to evade predators in the dark oceans. Sometimes, the light can attract bigger creatures closer that can scare away or eat the predator.

Have you ever gone on a night dive on a coral reef with a blacklight flashlight? It’s amazing! The ocean glows with literally a different light at night. This is because many corals “light up” using fluorescence. What they’re actually doing is absorbing some of the invisible, intense light energy from your blacklight dive light. This energy stimulates them. Then, they emit back a less intense, visible light that we can see. This is what makes them glow. 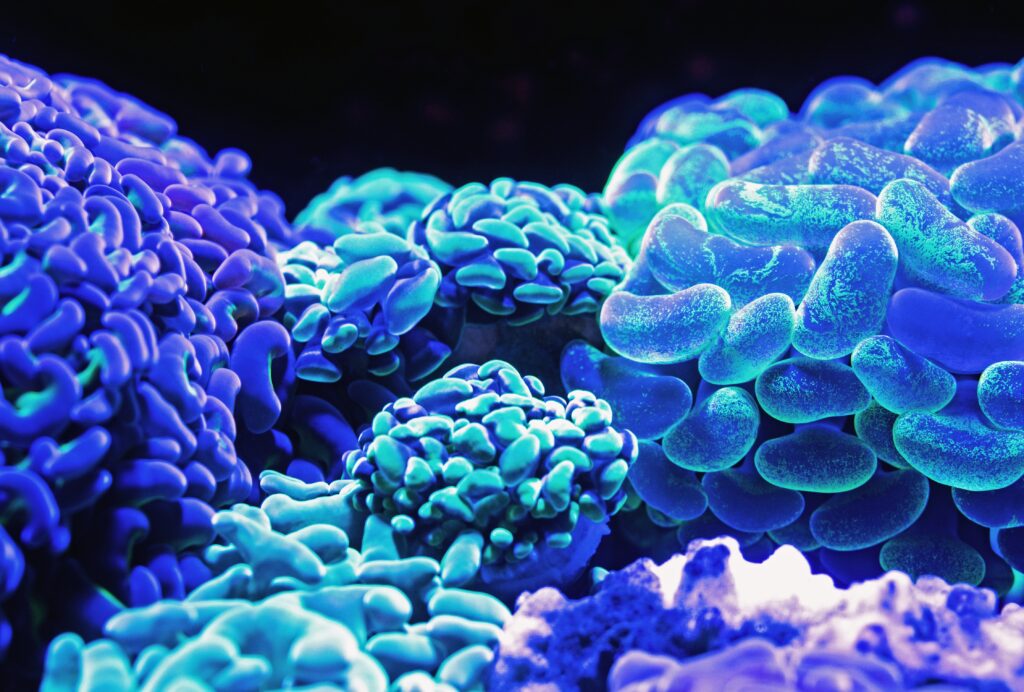 Corals fluoresce under blacklight because they absorb some invisible UV energy and re-emit it in lower frequency, visible color. David Clode / Unsplash

While bioluminescence creates a light produced from within via chemical reaction, biofluorescence is the opposite. Fluorescing organisms must absorb light energy from an external source in order to re-emit it in their own color. Therefore, we can’t see fluorescence in complete darkness. This is because these animals can only showcase, or emit, their own light after having an outside light source shine on them to give them energy.

According to Catalina Island Marine Institute (CIMI), certain species of fish and sharks, eels and even Hawksbill sea turtles will all fluoresce and glow in neon colors if you shine a UV light on them.

Scientists don’t fully understand why creatures of the sea fluoresce. In reality, researchers didn’t even realize that other marine species aside from corals could glow like this until 2014. According to CIMI, they hypothesize that it could be a complex form of cross-species communication between other creatures who can see unique UV emissions.

Phosphorescence is true “glow-in-the-dark.” Similar to fluorescence, phosphorescent particles don’t glow in complete darkness. They also must absorb energy from an external light source. The main difference is that phosphorescence continues to glow for longer after that light is turned off.

This is how glow-in-the-dark stickers and your dive computer work. You “charge” them with your flashlight and they stay lit up for a few seconds after you take away the light source.

Sea pens are the most common phosphorescent marine animal.

Get to Know More Glow 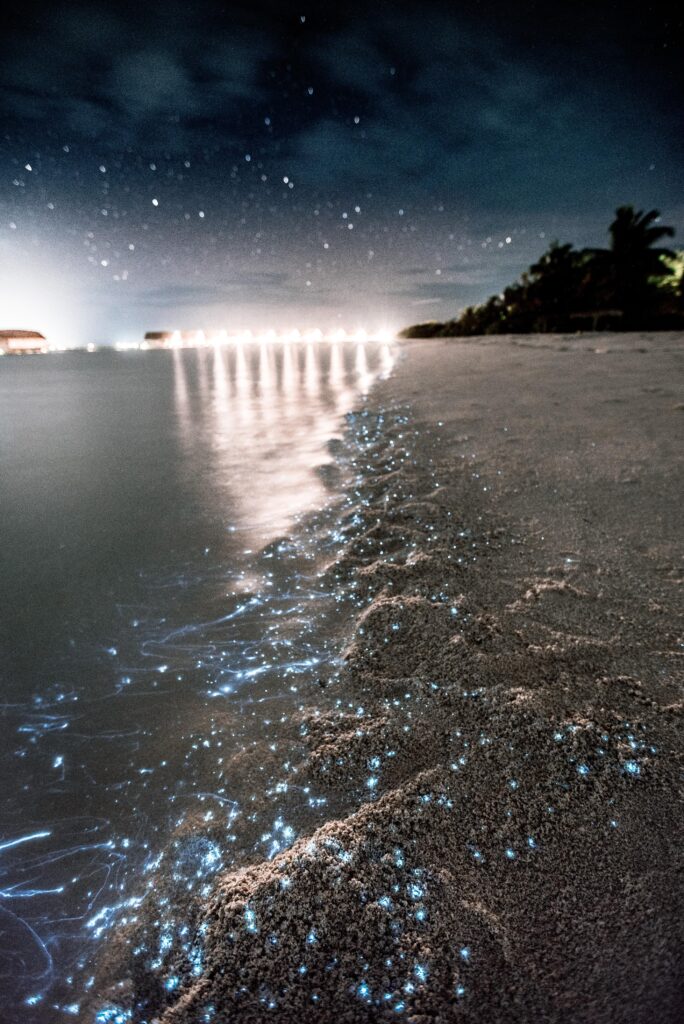 Bioluminescent dinoflagellates light up a sandy beach in the Maldives. Kevin Wolf / Unsplash

By accepting you will be accessing a service provided by a third-party external to https://oceanadventure.net/