Even though coming across a massive shark or whale is an undeniably exciting experience, sometimes the tiniest creatures can give you the biggest thrill. Big isn’t always better, especially in the sea. Check out these fun small marine life species. 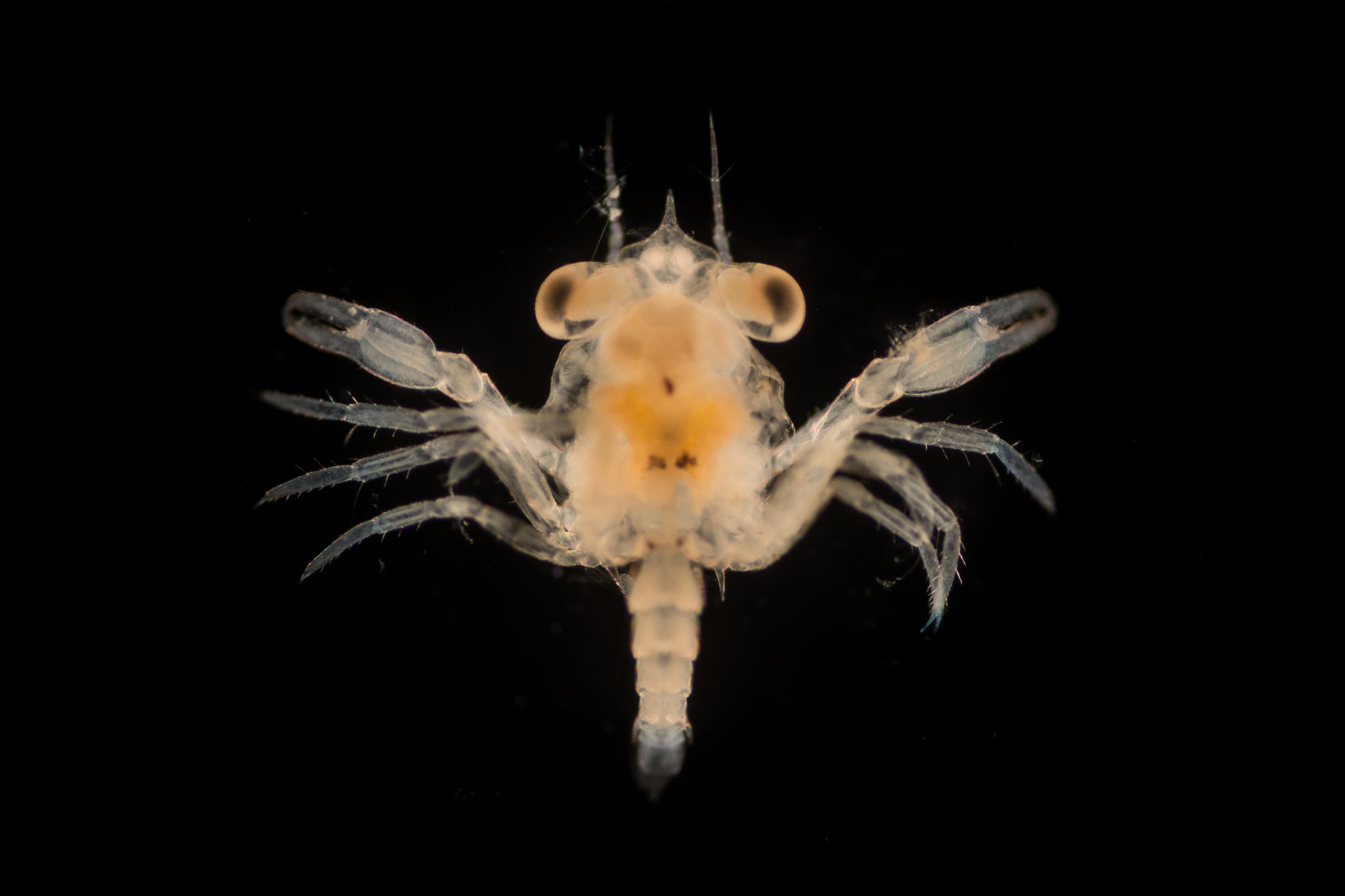 Tiny, But Not Insignificant

It’s worth remembering that the largest marine animals often feed on the smallest. Think, REALLY small. Krill and plankton make up the diet of tremendous beasts like whale sharks and humpbacks, and many animals form their entire migrations around these tiny animals.

Some of these little guys aren’t necessarily just fish food, and they make their way with surprising grace. These exceptional creatures know that they are on the bottom of the food chain, doing their best to confuse larger predators with unbelievable tactics. As a pretty large predator yourself, you can expect to have to do a little work to find these small soldiers.

Because of their size and natural camouflage, finding the smallest creatures on the reef takes a bit of skill and an undeniable amount of patience and luck. Keep a close eye on the small scale: Tiny cracks and crevices withhold untold treasures. The reef is constantly busy with activity, as the coral itself is alive.

Some of the small marine creatures prefer the relative protection of atolls and lagoon, while others take their chances out in the open seas. Larger reef systems are often more sheltered than smaller ones, but that certainly doesn’t mean you won’t run across one or more of these little beauties on any reef dive you choose.

The next time you’re diving, look out for these species of surprising small marine life. 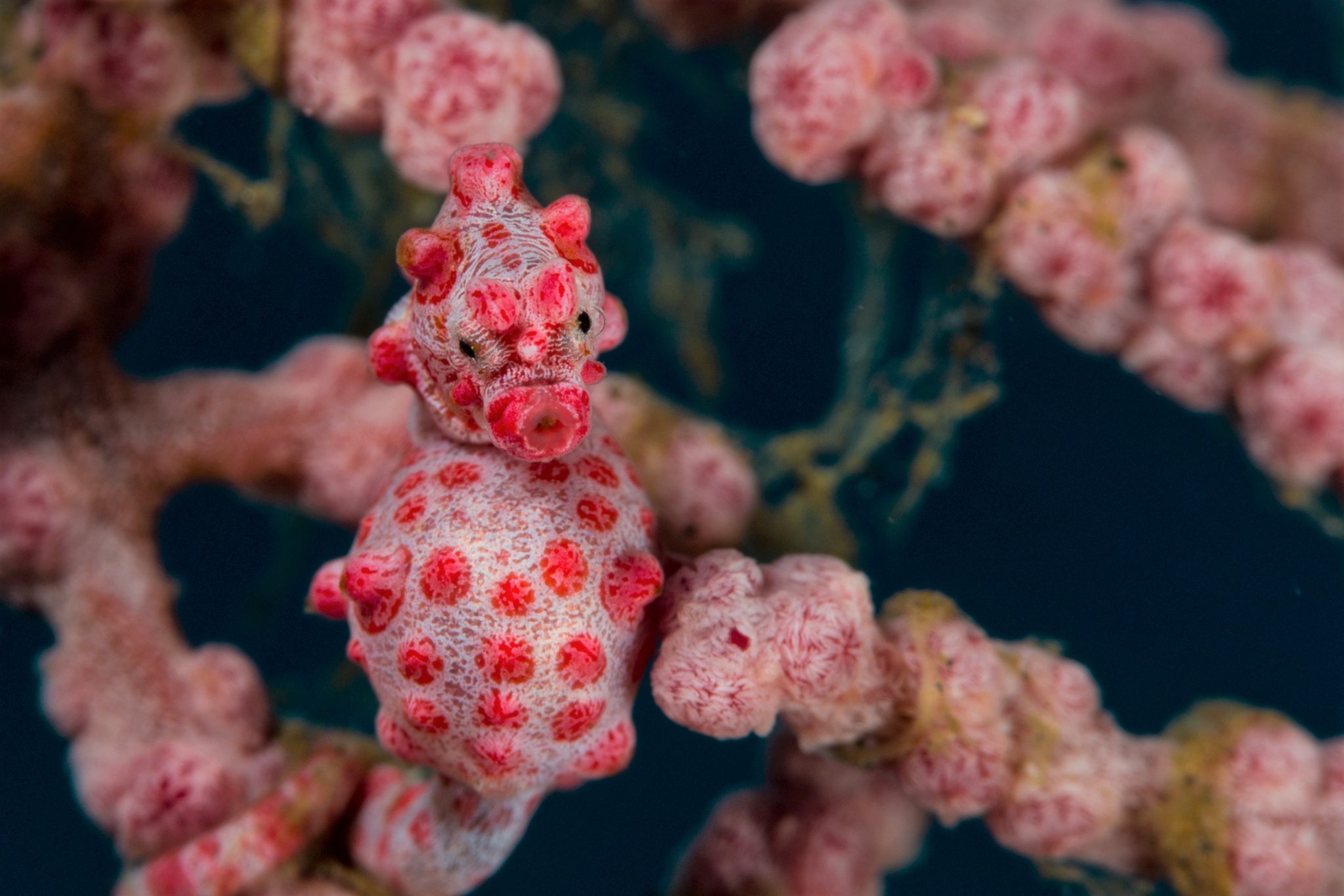 Can you spot the pygmy seahorse in the picture above? Look closely. Yep, there he his! His tiny tail is wrapped around the gorgonian of a strikingly similar hue and texture. This little guy’s camouflage is unbelievable, as he would make a tasty snack for predators. There are several species of pygmy seahorses.

The tiny seahorse above is a Bargibant’s pygmy seahorse, and they are always found on gorgonian corals, spending their entire life on a single coral. Individual seahorses’ colors vary, matching exactly the coral they inhabit. If you happen across these bumpy species of coral (Muricella) during a dive in Southeast Asia, search carefully for this timid, tiny creatures.

Other types of pygmy seahorses live in Micronesia, Fiji, and Japan. You can find them in sea grasses, soft corals, or sea fans, and one type is free reigning, going where he pleases.

An interesting tidbit of information: It is the male seahorse, not the female, that carries the young, and gives birth. Wild! 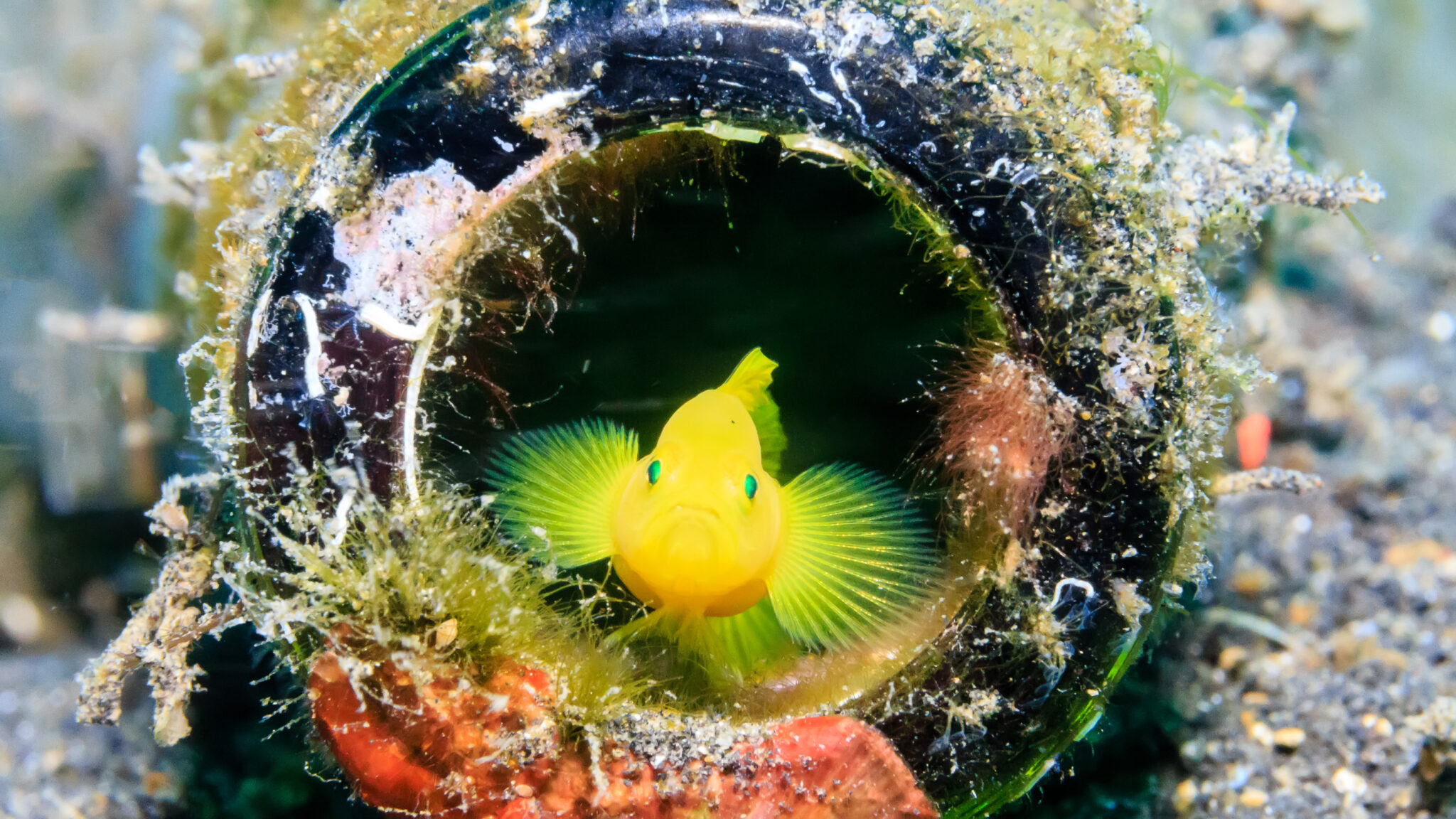 There are more than 2,000 species of goby, one of the largest fish families on the planet. With so many diverse species, there is a vast range of personalities and appearances to contend with. For our intents and purposes, we’ll focus on the smallest gobies; those ranging under 10 cm in length. Some gobies, most notably the Pandaka pygmaea and Trimmatom nanus grow to be less than 1 cm long, at full adulthood.

Most gobies are bottom dwelling, resting lightly on their tiny fins. Between their pelvic fins is a circular sucker, similar to that utilized by remoras to cling to the bellies of large fish and mammals. Gobies use this to cling tightly to rocky bottoms, defying the currents. Most gobies create burrows for themselves, utilizing the relative safety for shelter and spawning. Maintaining these burrows is of the upmost importance, and they will defend their territory with vicious enthusiasm.

You can see gobies literally everywhere in the world, from salt to fresh water, clear to murky. Some gobies, known as mudskippers, can even clamber up on land. On the reefs, 35% of the total population of fish are gobies. How’s that for diversity? 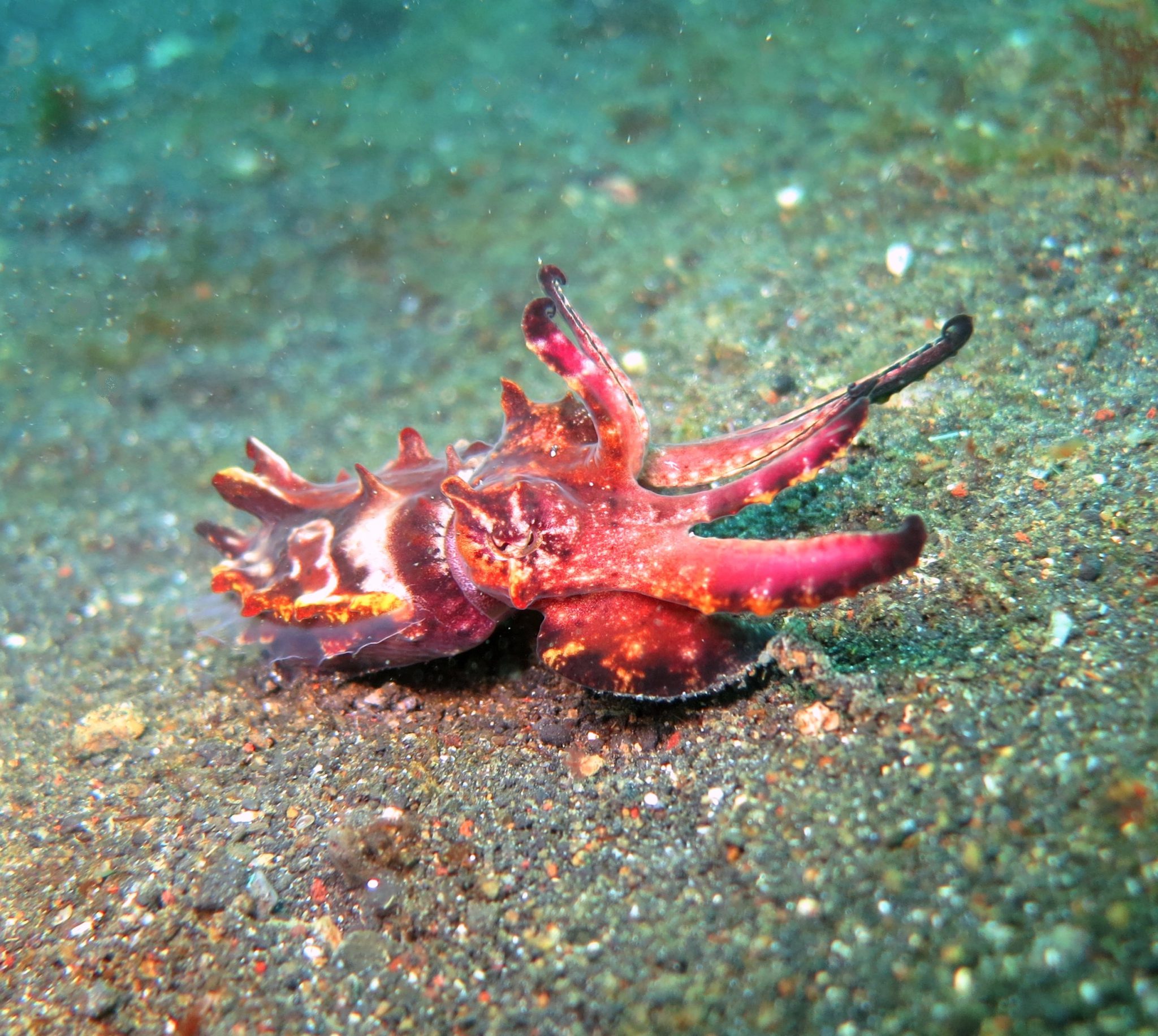 One of the most fascinating creatures of all is the mystifying cuttlefish. Their tantalizing, colorful displays seem to be straight out of a sci-fi movie. In ways we cannot yet understand, the cuttlefish engage in rapidly changing their patterns and colors, thereby communicating with one another.

One color combination that is easy for divers to comprehend is anger. The cuttlefish rear up their arms, turning red, black, and white in rapid succession. It’s best to back off if you see this behavior: you’re far too close, and you’re bound to get inked! Also, cuttlefish are venomous. Just a heads up.

Ah, Plankton, where would we be without you? Food for the masses, plankton are, perhaps, the most important of our tiny species.

Plankton aren’t one single organism, they are a collection of many microorganisms. Some are single celled, and others can be larger than 20 centimeters! Because of the vastness of all that makes up plankton, there are 7 subsets to help identify, all of which are designated by sizes. This ranges from teeny Femtoplankton, which are marine viruses, to Megaplankton, which include all of the jellyfish you know and love.

These little guys are so small that they can’t fight the current, and are pulled around in the various streams that circle the globe. Their name is actually derived from a Greek word that roughly translates to “drifter.”

Quietly taking care of business, blennies are another seafloor dwelling fish found abundantly all over the globe. There are over 800 species of blennies, coming in an incredible range of shapes and sizes. Some are quite elongated, and could be described as eel-like.

Divers are most likely to see blennies resting on the bottoms, or peeking out from their burrows. Much like the goby, blennies defend their homes heartily, sometimes with their lives.

Some blennies have unique whiskers, helping them to find prey. Regardless of the type of blenny, most all are reclusive fish, and seeing one is usually a brief affair. 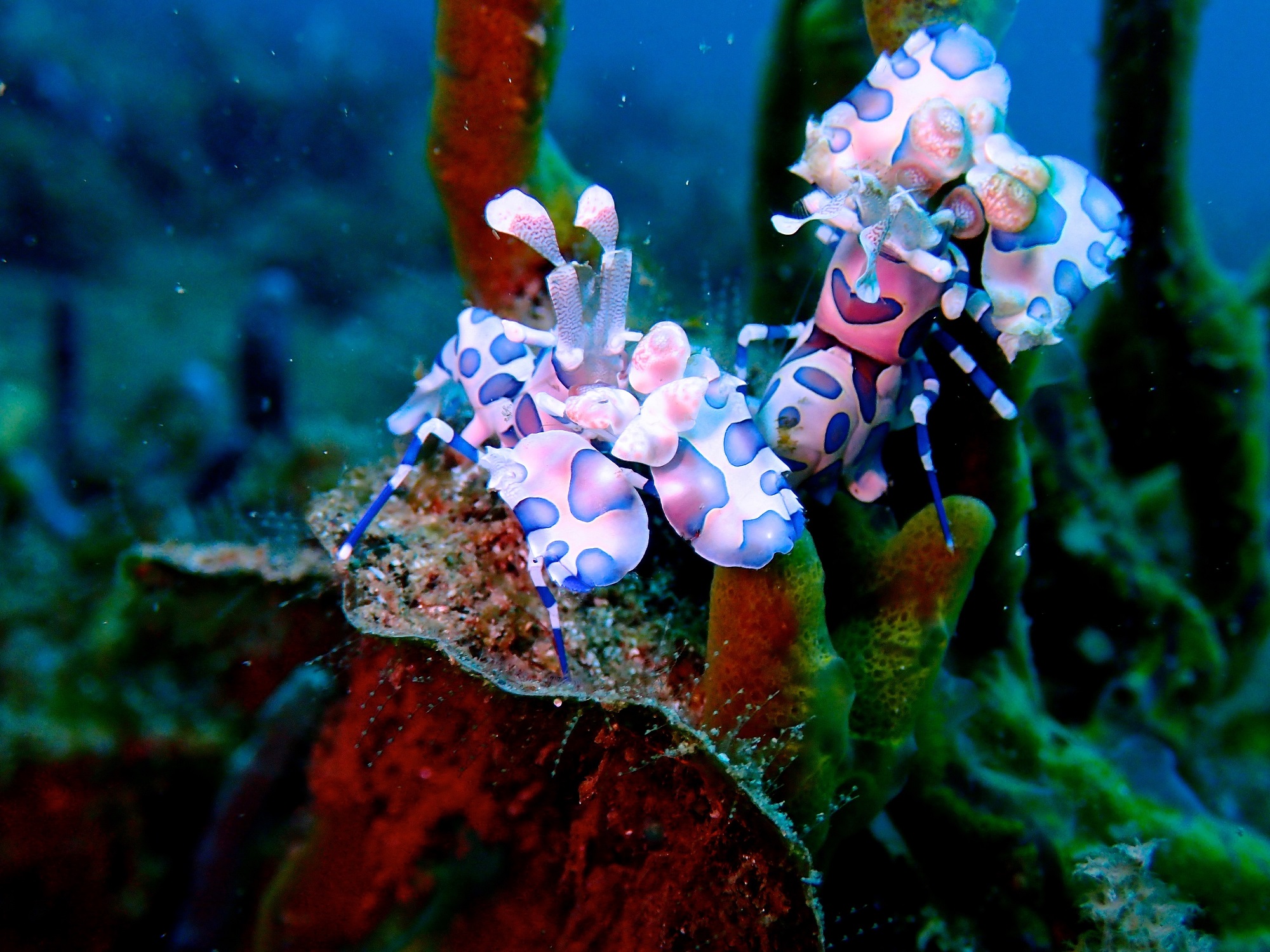 Shrimp are an incredibly important crustacean. There are hundreds of species of shrimp, ranging in size from very small to surprisingly large. You can find shrimp all over the world, both in fresh and salt water. Most shrimp, however, are found in saltwater, only around a quarter can be found in fresh waters.

Shrimp, along with many other crustaceans, are the garbage men of the sea, cleaning up what others leave behind. Some eat algae, others eat parasites, and others eat animal waste. Most all shrimp stay close to the bottom to gather food.

These little creatures behave differently depending on their species and location. Emperor Shrimp spend their life on sea cucumbers, cleaning them of parasites and hitching a ride. Unique Pistol shrimp, with their purple arms, can make some of the loudest sounds in the sea, blasting predators away with an impressive boom.

The ornate pipefish pictured above is called the Harlequin Ghost Pipefish. It lives in the Indian Ocean and out into the Western Pacific. Though this species of pipefish is fairly common, they are notoriously difficult to find as their camouflage is second to none.

Pipefish are a part of the same family as seahorses and sea dragons, and once you get close you can see the resemblance. Pipefish have straight bodies, and rely solely on their dorsal fins to get where they need to go.

There are many other varieties, spread out in tropical and temperate seas around the world. Some pipefish can even be found in fresh water, but they are far less common. Pipefish prefer calm, warm waters, and usually spend their time on the coral reefs or in sea grass. 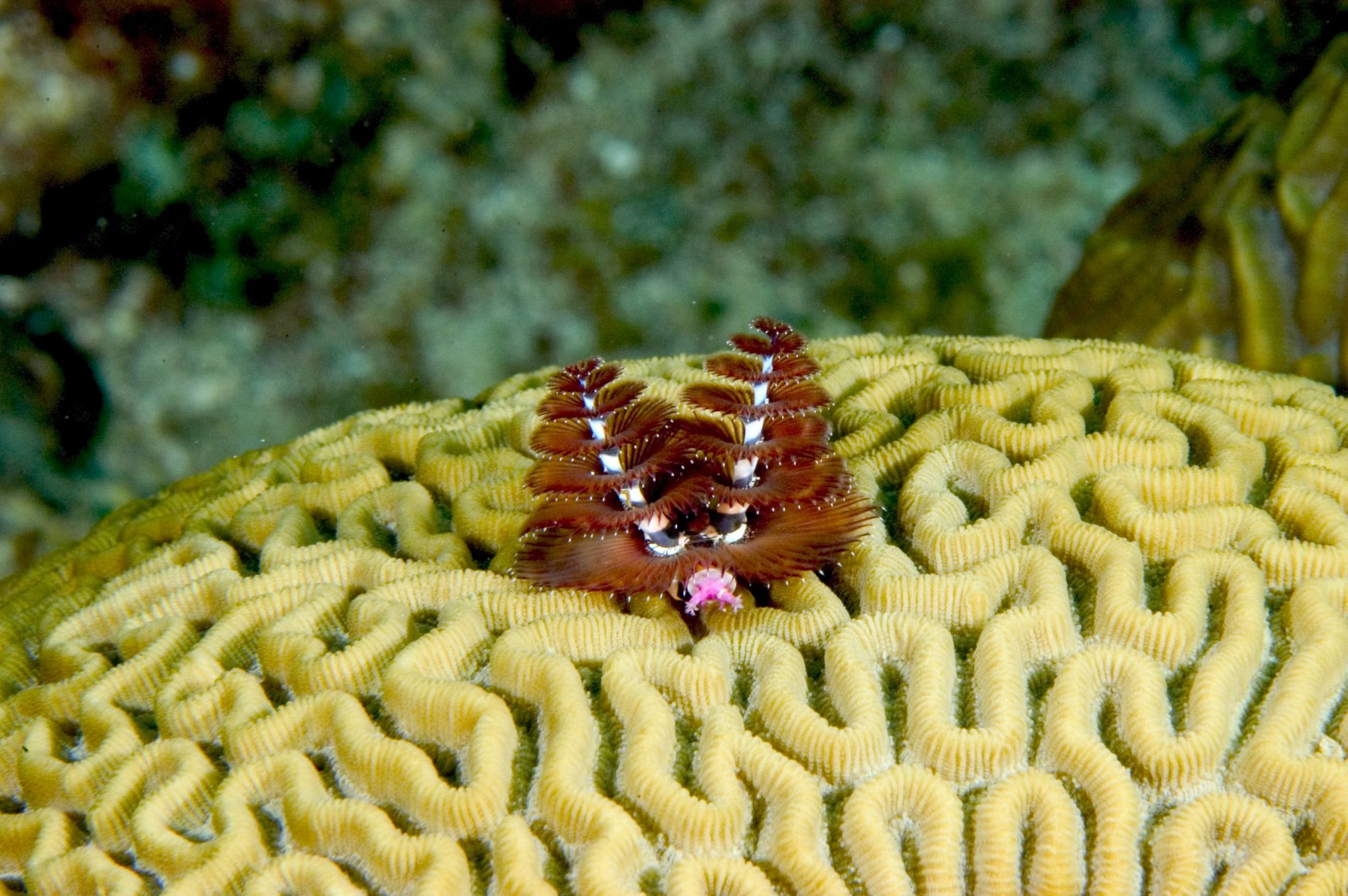 Christmas tree worms come in a wild variety of colors from multicolored red and white to vibrant blues and yellows. They get their name from their recognizable shape, conical with branches. Christmas tree worms use their tentacles to filter the water, pulling small organisms into their mouths.

You can find Christmas tree worms in warm, tropical waters. They are most prominently found from the Caribbean to the Indo Pacific. Look closely at corals, rocks, and even manmade structures to find these ornate creatures.

Wave your hand in front of a Christmas Tree Worm, rushing water onto their feelers, and they will shoot back into their tubes. The worms never leave their tubes, but can plug the opening, if they feel threatened. 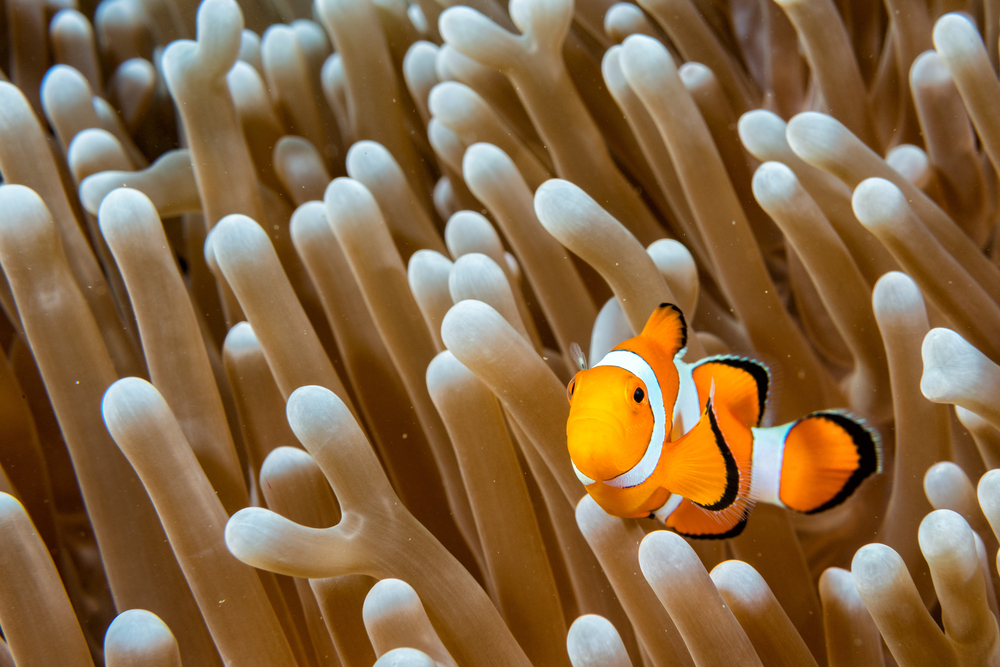 Take note of the clownfish, folks, coming to an anemone near you! Clownfish, besides being a rather adorable sort of fish, have a fascinating relationship with their closest friends, the anemone. Anemones, as you know, sting fish by snagging them up in their stinging tentacles. They then entrap them from all angles and pull them into their centers, where the prey is digested.

Clownfish, in exchange for protection and occasional bite to eat, are granted amnesty from the stinging cells. The bright orange and white fish spend most of their time in the anemones, even laying their eggs and raising their young there.

You can see clownfish in warm waters, and are most prevalent in the Indian and Pacific oceans. You can even find these fascinating creatures in the Red Sea. Just so you know, you won’t find any clownfish in the Atlantic. 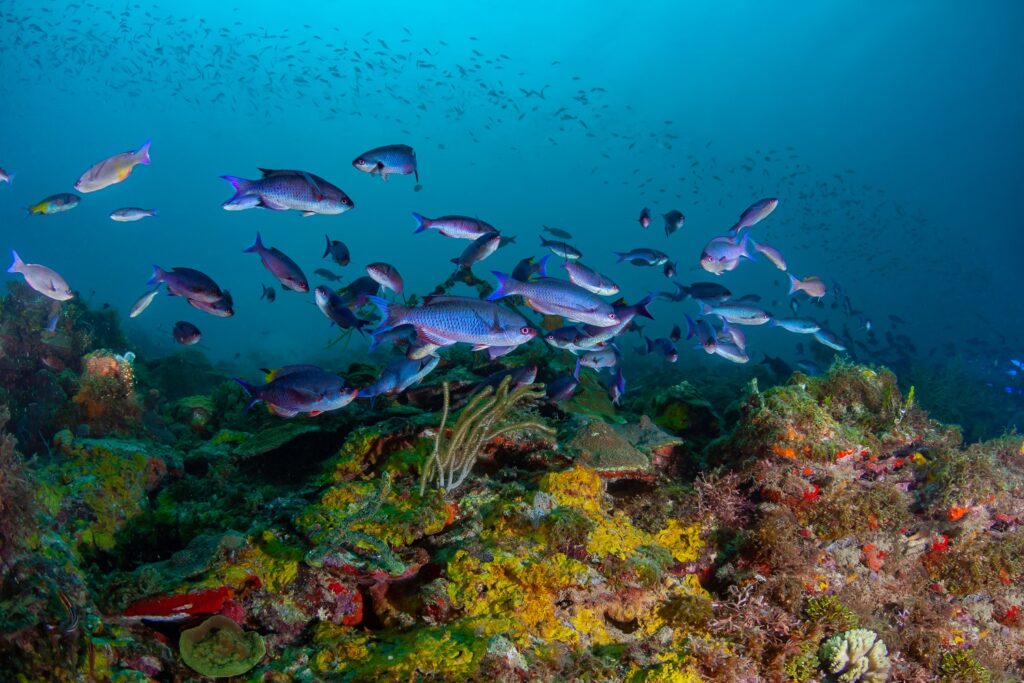 Admittedly, not all wrasse are small. Some are actually quite large, like the Humphead Wrasse. However, because of the intense variations of size and their incredible abundance, wrasse deserve a section, in my book. Some of the smallest wrasses are fairy wrasses, which boast some of the most impressive coloration in the family.

There are over 600 species of wrasse, found in warm waters around the world. You can find them in the Atlantic, Pacific and Indian oceans, in the coral and rocky reefs, respectively.

Some of the most well-known wrasse are cleaner wrasse, which brave the orifices of all sorts of marine creatures. Animals flock to these “cleaning stations” where wrasse perform their indelicate work, nibbling parasites, algae, and indeterminable junk. You won’t find many other fish between a shark’s teeth… alive, that is.

Unbelievable, right? There are many species of nudibranchs, over 2,300. The particular species above is called a Spanish Shawl Nudibranch. These extravagant creatures are found on the West coast of North America, all the way from British Columbia to Baja California. You might even find them on a trip to the Galapagos Islands.

The bright colors on the nudibranchs signify to predators that they are no good to eat, similar to a poison dart frog, on land. The chemicals they produce are usually far from lethal, but give predators a harsh reminder to keep their teeth to themselves.

Though they are sometimes called sea slugs, the name doesn’t do them
justice. Nudibranchs feed on a variety of things, from sponges to algae. Surprisingly enough, some nudibranchs, especially the sea swallow, is a surface dwelling that dines on the notorious Portuguese man o’ war. Just one more reason to pay homage to these incredible creatures.

Surprisingly, you can find nudibranchs in all types of salt water, even in Antarctica! Some stay in bright, warm shallows, and others are found at exceptional depth, well over 2,300 feet (700 meters). One new nudibranch species was found at 8,200 feet (2,500 meters). Unfathomable!

Quite often, the smallest creatures can be the most exciting. After searching a gorgonian for what seems like hours, when you finally come across that pygmy seahorse your sense of accomplishment will be off the charts. It’s certainly worth looking a little more closely if doing so means you can encounter these amazing animals.

And, if you really want to perfect your fish identification skills, for both big and small species, consider enrolling in a PADI Fish Identification Diver specialty course before your next dives.

This blog was originally written by Bridget Pearson and published on the Diviac Magazine.