Why I’m Thankful for Diving

I often speak about how diving saved my life.

The story starts in 2015, when I was a miserable, overworked Los Angeles lawyer. Back then, I followed all the rules and did everything “right”. The result was a career and life lived by the books and devoid of wonder.

Diving changed all that. 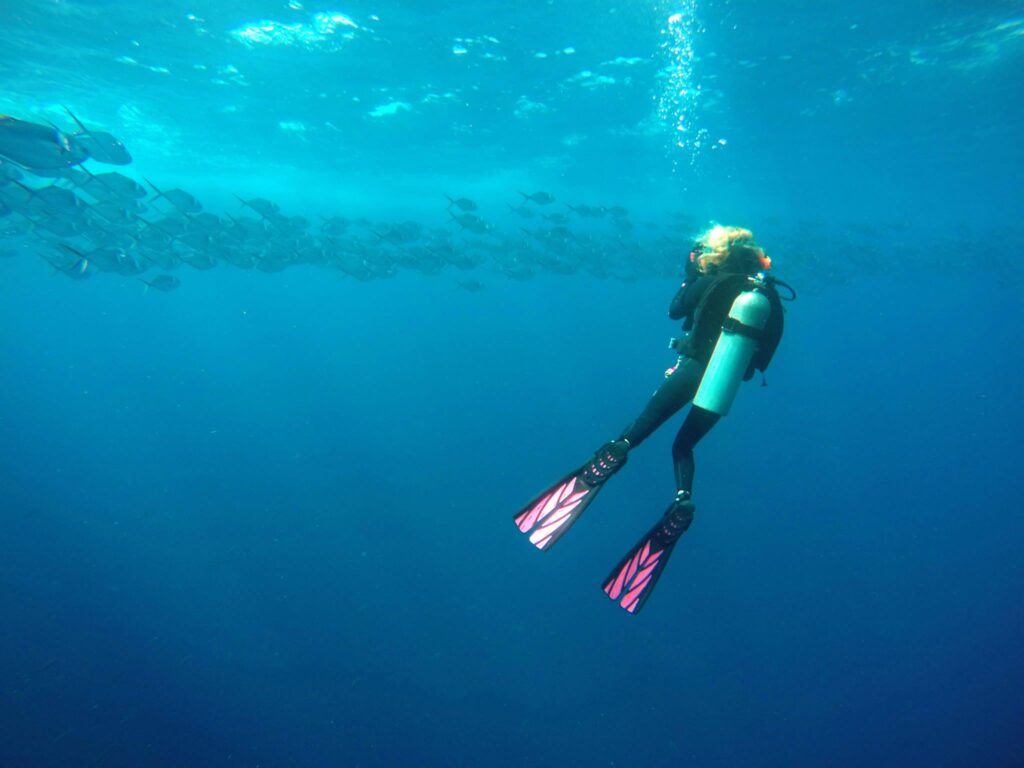 I took this photo of my dive buddy on our safety stop as steel pompanos encircled us. This was one of those “magic” diving moments I’ll never forget. Tiffany Duong

The Start of a Love Affair

It started with one scuba dive in the Galapagos.

It was my first drift dive ever, and I was terrified to not be anchored down near the seafloor. Thus, I gave myself a pep-talk at the bottom of the sea that went something like, “Tiff, if you don’t let go of this rock now, you will die here alone, at the bottom of the ocean. Let go NOW!”

As I allowed the ocean to take me and learned to trust her, something deep and strong stirred within me. Before I knew it, I was surfing the currents, like the turtles in Finding Nemo. I was exhilarated. Fear had been replaced by flying. I felt free.

I emerged from that dive changed, new life coursing through my veins. I’d discovered a whole new world and a whole new me. That was the beginning of my lifelong love affair with the sea and with scuba diving. 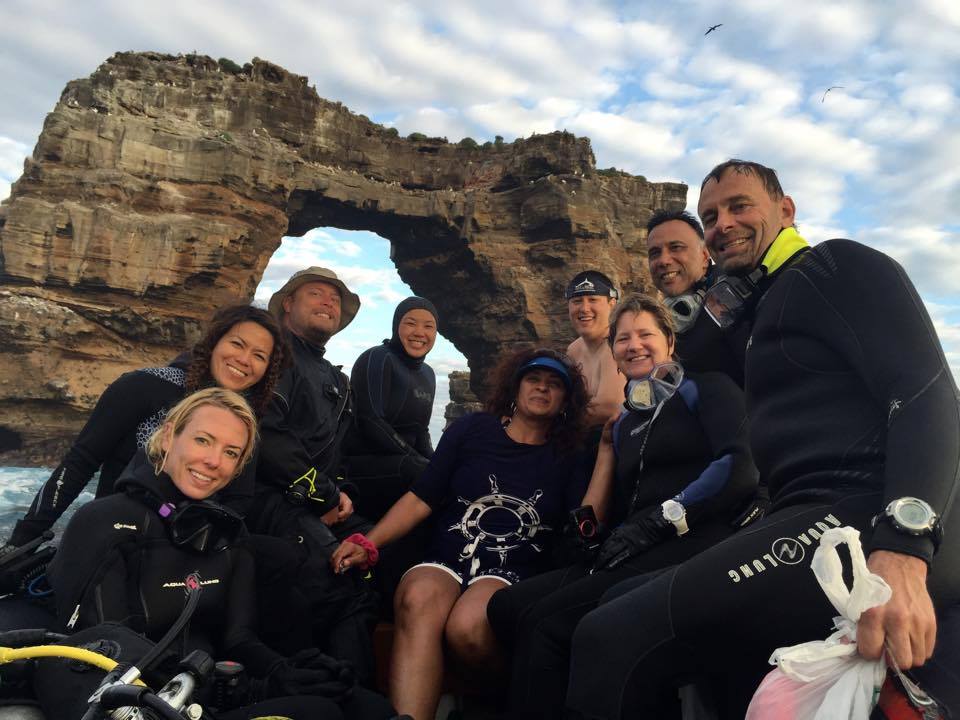 Diving right off Darwin’s Arch (before it fell) in the Galapagos was an experience I’ll never forget. Tiffany Duong

How the Sea Saved Me

The week wore on, and I slept on the deck of the boat — unable to leave the warm winds and salty seas for even a night. Then, on the plane ride back to L.A., I was overcome with anxiety and inexplicable grief about leaving. I didn’t fully understand why, but I knew that things had to change. In the weeks that followed, I sold my house, quit my job, and decided to go with the flow of life to see where it might take me. The sea had called, and I was ready for an adventure.

It’s been over six years since that fateful trip. Some 300 dives later, I’m still as enamored by the sea as I was back then. Now, as an ocean advocate and storyteller, I have the joy of sharing what the sea means to me every day. 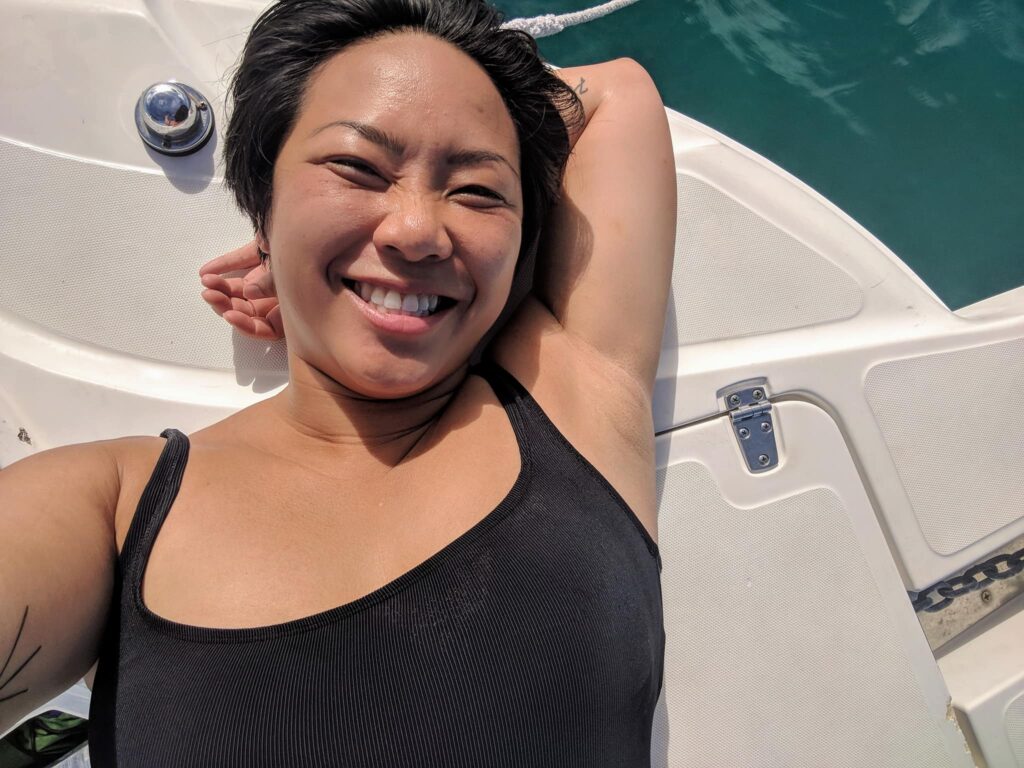 I’ve discovered that my happy place is on the bow of a boat, ready to take a giant stride into my next underwater adventure. Tiffany Duong

For awhile, I was a scientific scuba diver working in coral restoration. Tiffany Duong 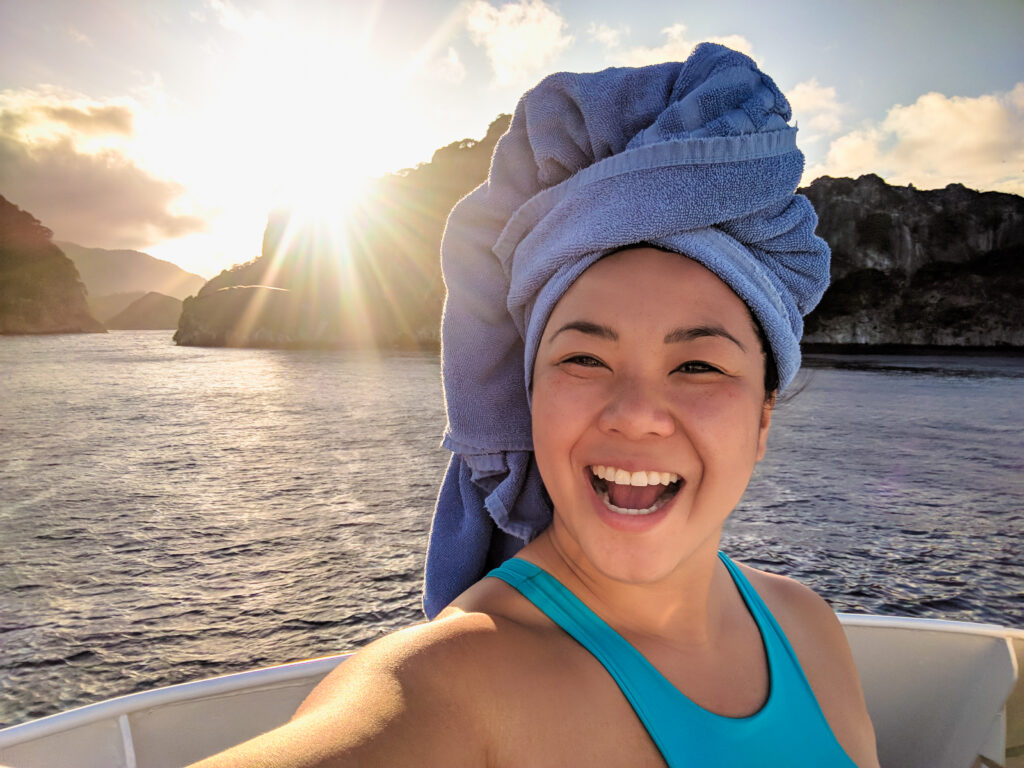 Scuba diving has brought me to some of the most remote, pristine places on the planet, like Cocos Island in Costa Rica. Tiffany Duong 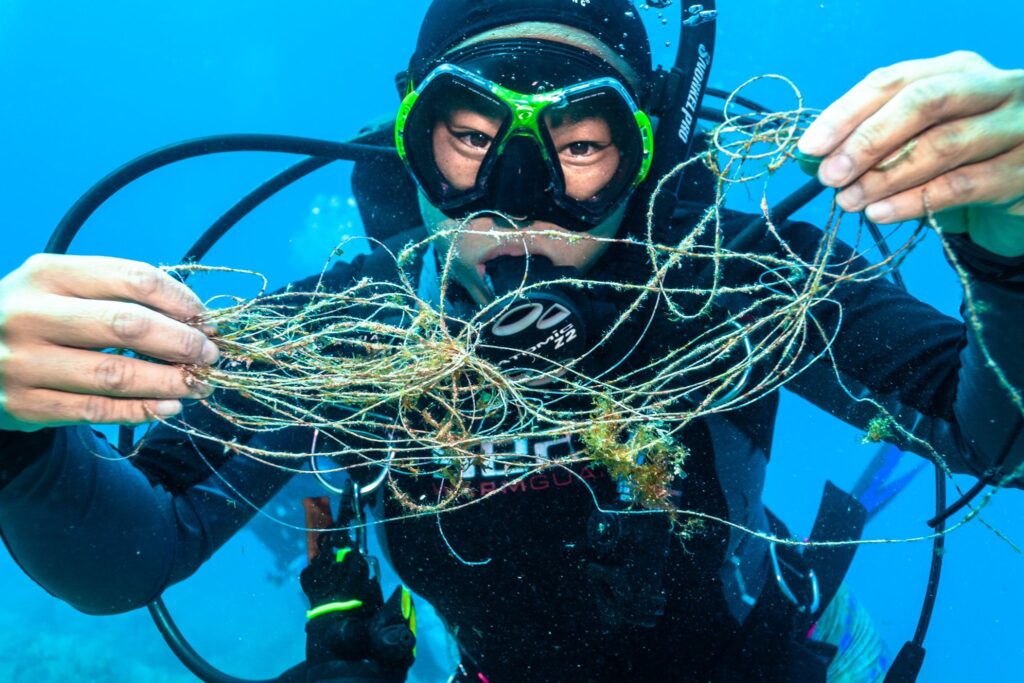 Dives Against Debris are one of my favorite ways to help the ocean. Tiffany Duong

There Are No ‘Rules’

Under the sea, there are no “rules” per se; there’s no air to breathe, and even gravity responds differently. It’s no wonder that my tightly-wound past self found herself so at peace beneath the surface: it is the epitome of freedom.

As a diver, this permission to go anywhere and be anyone is literal. I can float in any and every direction. I can choose to go upside down, sideways, and one leg out. It doesn’t matter. That notion has been so incredibly liberating for me. 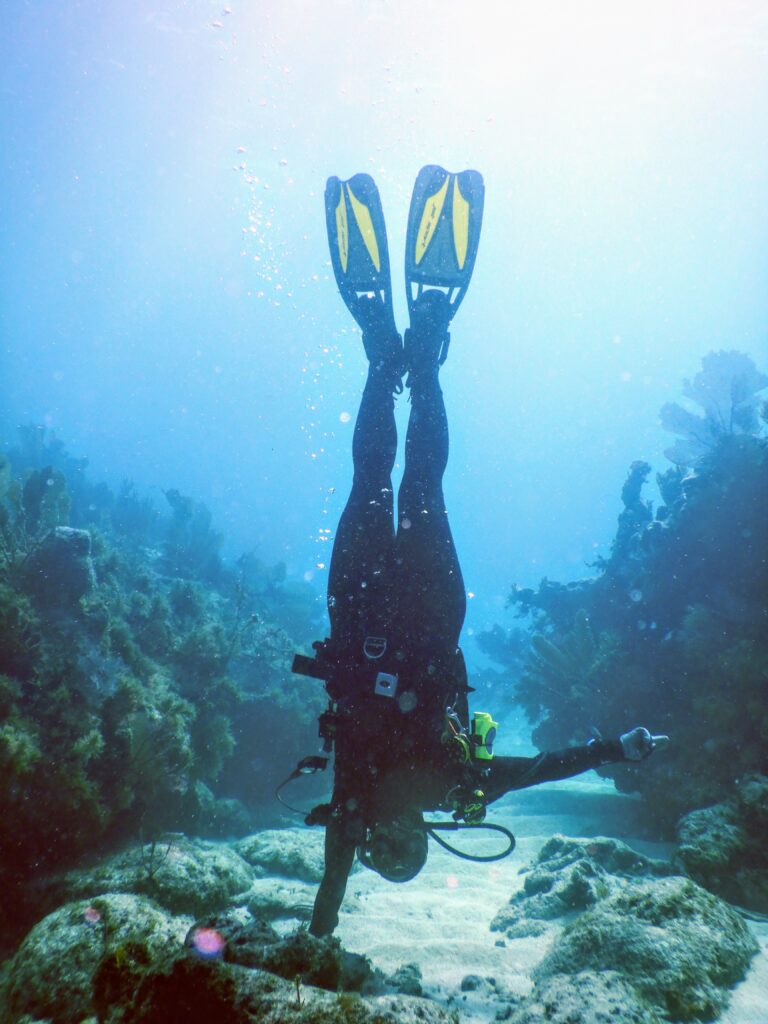 I celebrated my 100th hour underwater with a one-handed handstand — because even the rules of gravity are different underwater. Tiffany Duong

These thoughts run through my mind every time I duck below. Once I descend, I spread my arms out wide. I imagine myself as a manta ray over the reef, one with the ocean. Sometimes, I close my eyes to better feel the drag of the silky water across my skin. I trickle my fingers through it as I would out of a car window and smile — utterly content.

Joy and Magic Beneath the Waves

As I’ve explored more of the blue world, I’ve also discovered magic and joy, which were so elusive in my past life. From marriage proposals on scuba (the ring was in a go pro case) to underwater pumpkin carvings to veterans experiencing the “therapy of the sea,” I’ve witnessed it all. These “regular life experiences” are amplified when done underwater, on scuba. The waters really are healing and beautiful. 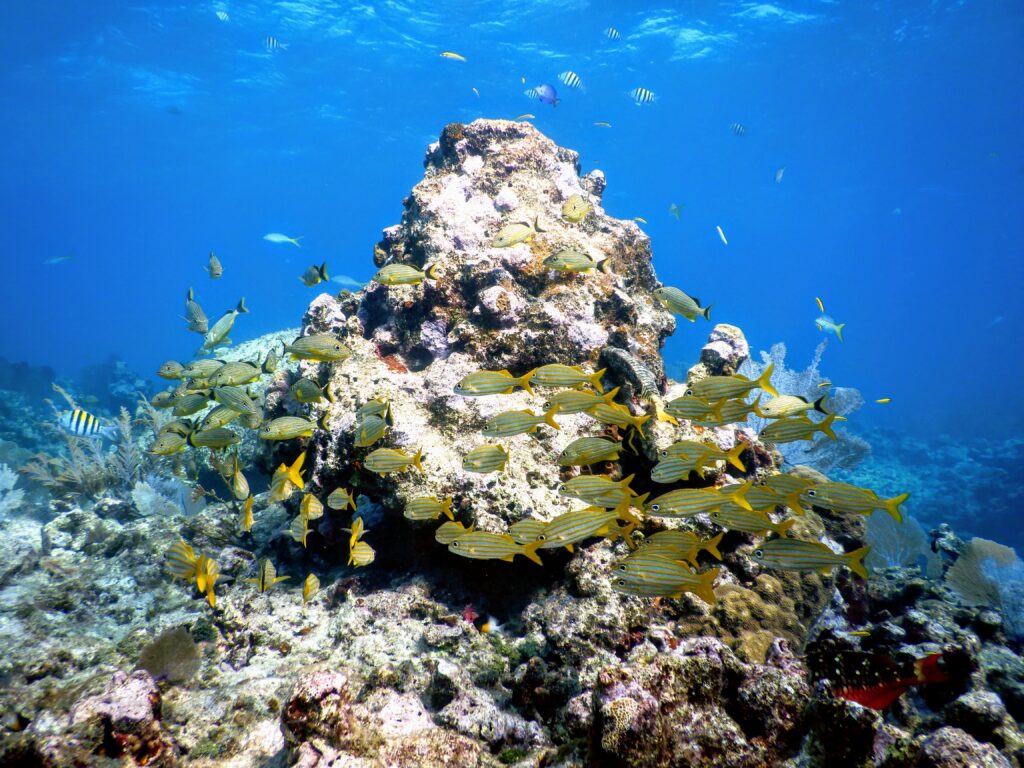 And, finally, diving has brought me my tribe. We’re all searching to belong in this world, and I’ve found my place amongst a rag-tag bunch of divers, boat captains and ocean enthusiasts who call the Florida Keys home. In the water, we are our best, happiest selves. Sure, we’re different; but we all sway with the same swells here in paradise.

My friends all share a love of diving and the ocean. Tiffany Duong

What Diving Has Given Me

And so, when I say that diving saved my life, I really mean it. It saved me from a reality that I hated and brought me into a version of myself I never could have imagined. For example, I’ve gone freediving with crocs, helped release numerous sea turtles, and done a Dive Against Debris with Fabien Cousteau (he’s awesome, by the way). Adventure after adventure, my very favorite moments somehow always involve water and diving.

Basically, I’ve had the absolute time of my life below the surface. All of this has given me purpose, pleasure and joy. And for that, I’ll forever be grateful. 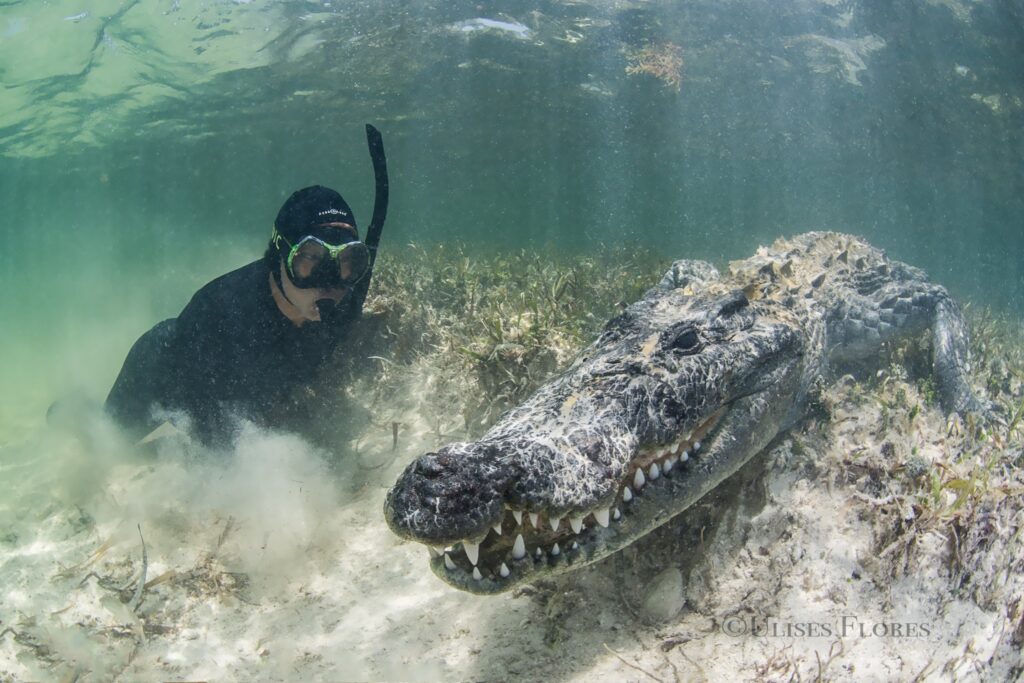 One of my favorite adventures was breath-holds with a croc in Banco Chinchorro, Mexico. Tiffany Duong 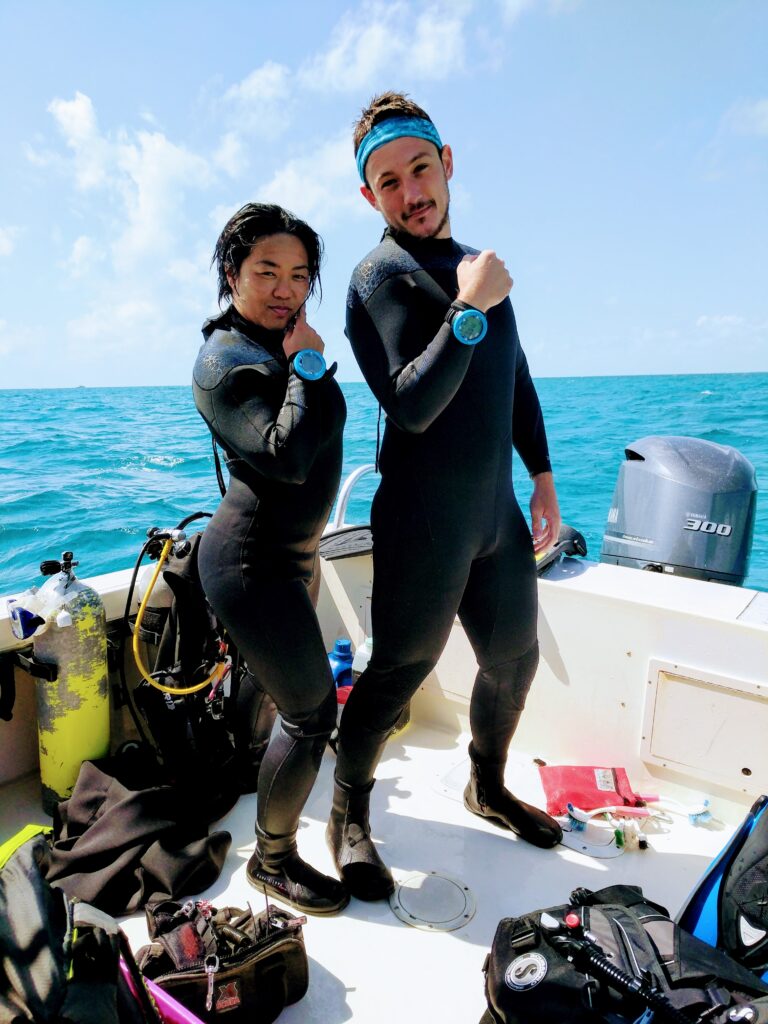 Sometimes you’re so in sync with your dive buddy that you dress alike underwater. Tiffany Duong 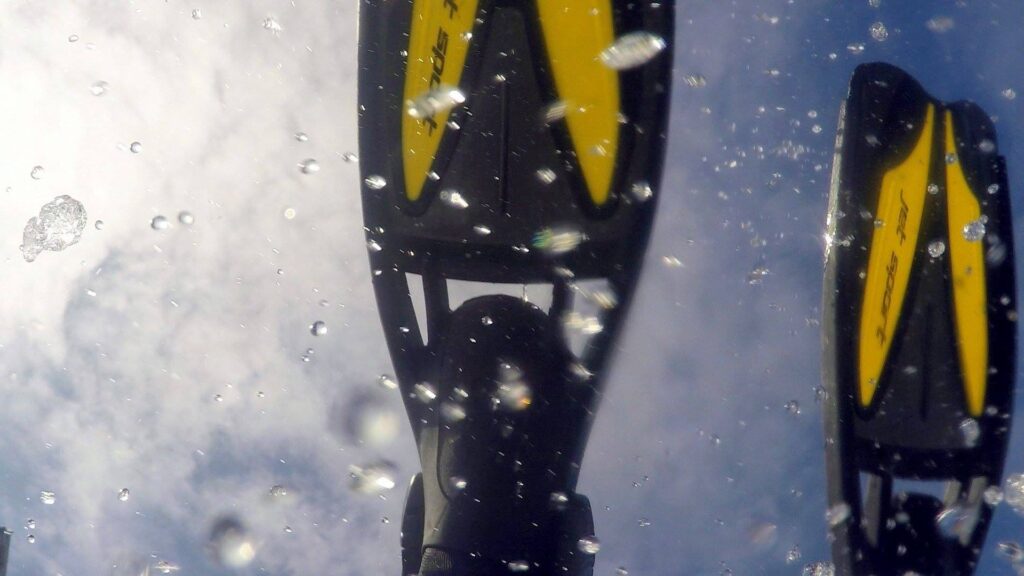 Fin tips up and ready for the next adventure. Tiffany Duong

3 Merry Season Giveaways to Look Forward to on the...
My First Dive After Certification